Extract from the 2012 Annual School Report

Participation within the student leadership framework is highly valued at Killara High School. To encourage the extension of student leadership capabilities, there are six different groups that work individually and collectively to contribute positively towards the school and wider community. These leadership groups are the Arts Council, Prefects, Social Justice Committee, Sports Council and the Student Representative Council. Each of these groups are represented in the Senior Leadership Council: the co-ordinating body for student leadership. The Student Leadership Conference held in September was an event which explored the setting of targets for each leadership group and a means by which students could explore and amalgamate ideas of leadership.

The Student Representative Council focused on reviewing and updating the school uniform as well as several smaller projects which were completed by Council sub committees. Some of these projects included increasing the volume of the school's PA system so students can more readily hear the bells and announcements.

The main focus however was on improving the quality and student appeal of the uniform. Along with the teachers and the P&C, the Student Representative Council assisted in improving the school uniform. Students were asked for their ideas via an online survey. The results were analysed and a number of changes were made to accommodate suggestions and these changes are currently being implemented. Our year also included going to conferences, hosting mufti days, selling fairy floss and more.

One of the Student Representative Council's ongoing traditions is to host the Year 7 Movie night at the start of the year to help Year 7 transition from primary school to high school through this opportunity to meet new people and have fun at the same time.

The Student Representative Council for 2011/2012 was effective in meeting its goals while providing an opportunity for students to meet and work with new colleagues.

On Thursday and Friday of the last week of Term 1, the Student Representative Council (SRC) re-painted the C Block Change rooms for both boys and girls. This is stage 1 of upgrading Killara's student facilities.

In the C Block Change rooms we wanted to get rid of the old yellow colour, remove the graffiti and gum off the walls, and make the change rooms a cleaner and more appealing place. We started by washing the walls with sugar soap to remove dirt, marks, rubbish and graffiti. Then we followed with painting an undercoat over the old colour on all the walls, benches, hooks and shower cubicles. Next we painted the walls a light blue colour and completed two coats of this. However we left the benches and shower cubicles with just the undercoat which will be painted a different colour next term as part of our next phase.

The SRC used funds raised by the students from various SRC fundraising events such as barbecues, mufti days, fairy floss and cake stalls to fund this project. We are excited to keep working hard on improving the school's bathrooms and change rooms to benefit students at Killara High School.

The SRC are also working on re-stocking, cleaning up the classrooms, introducing and educating students about a recycling scheme that will be implemented early next term. 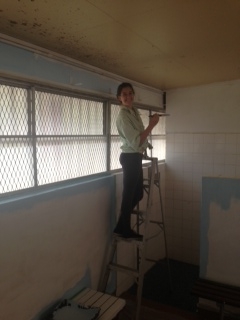 All members of the SRC thoroughly enjoyed painting the C Block Change rooms which gave it a face-lift, making it last longer and be more durable for the future.  We would like to thank everyone who helped the SRC in completing this project.